Google, the world’s search engine giant, asked its user to sign a petition protesting against the two anti-piracy laws – SOPA and PIPA circulating in Congress.

On the terms of signing the petition, the company produced 4.5 million signatures on their anti-SOPA petition, Google spokeswoman confirmed.

The petition which was available via a link from Google’s homepage, states that although fighting online piracy is important, but the plan of attack described in the SOPA and PIPA bills would be ineffective.

The search engine giant usually changes its homepage logo from time to time, but on Wednesday, in the wake of protest, it turns out its logo black completely. A link below the blackout read “Tell Congress: Please don’t censor the web!” and lead to a page with the petition.

Google’s anti-SOPA and PIPA petition is not the only one but twitter, the world’s largest micro-blogging website also sees 2.4 million tweets from midnight till 4pm EST. 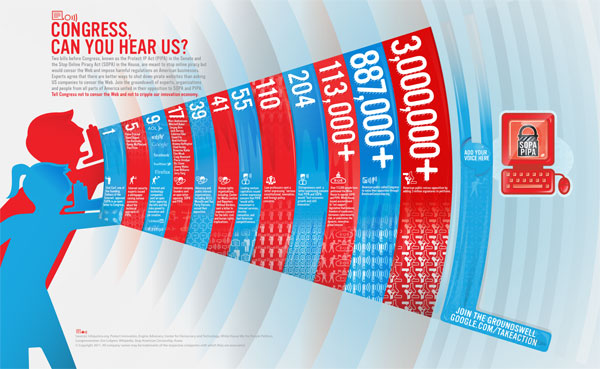