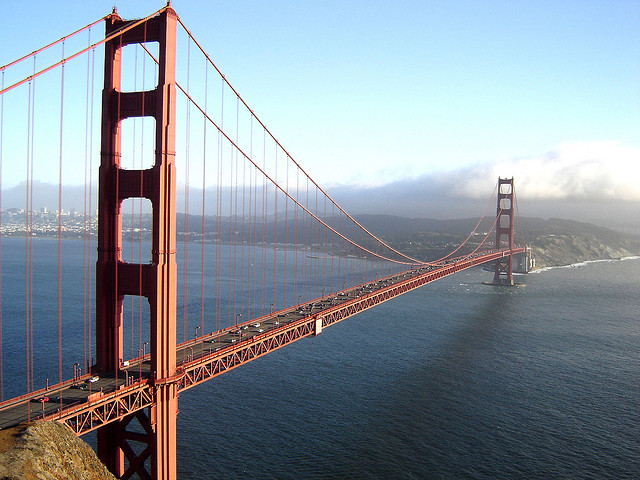 A very famous quote by Jim Rohn explains to us the importance of architecture, “Whatever good things we build end up building us”. Architectures like building, mega structures and bridges are the building units of a society in modern times. The modern era has brought leaps of changes in the way the normal life used to be decades back. World has become a global village owing to the pattern of architectures spread around the world. The bridges being the backbone of any city’s or country’s infrastructure, are helpful in linking two different part of the planes either separated by water or are on which one cannot build roads. Inside a city, these bridges can be used to form exits or entrance without causing traffic jams.

Golden Gate Bridge is the most visited and photographed place in the world. It is the most internationally recognized place from San Francisco – California.  It is also one of ‘Wonders of the Modern World’. The Golden Gate Bridge links San Francisco to Marine County. Total length of the bridge is a little less than 2 miles. The construction of Golden Gate Bridge started in 1933 and the project got finished in 1937. The project was finished before schedule despite the fact that it was also completed with US$ 1.3 million under budget. Till the year 1964, Golden Gate Bridge was the single longest suspension bridge, 227 meters above water level. A mere walk on the bridge will be enough for one to understand why it was considered so hard to build and why so many people especially from different parts of the world to visit this place.

The bridge is very famous among pedestrians and cyclists. There special walkways for sightseers and cyclists on the sides of the bridge. There are quite a few things that you can do while there at Golden Gate Bridge.

You can go for a guided tour, opt for a hike, walk or may be grab a bike on rent to experience the bridge and its magnificence. There is bridge pavilion at the entrance, offering range of souvenirs, information and stories about the Golden Gate Bridge. The pavilion opens daily at 9 in the morning and closes at 6 in the evening. It also has on display the original stainless steel bridge used for testing in 1933. There is an old bunker outside the pavilion. A pathway links the bunker with the pavilion. It has many exhibits regarding science, history and engineering of the bridge’s construction.

Personal Guided Tours of span of over 45 to 60 minutes are given to the visitors, day and night.

Green Screen Photography at Golden Gate Bridge gives you a chance for a virtual tour to the top of the bridge. The picture will make u seem like climbing the main cables or standing on top of the bridge with wind gushing by. The photo prints that you get by this green screen photography are worth any wall of your home.

Bridge Café is open between 9 am to 6 pm, featuring local and delicious foods, snacks and beverages.

There are Golden Gate National Parks at both ends of the bridge. Do not forget to have a quick peak of both of them for some amazing views.

About the Author
Scharyar Aly

Scharyar Aly is a professional content writer, he writes about places to be, travelling for adventures and canvas art designs for interior decorations.