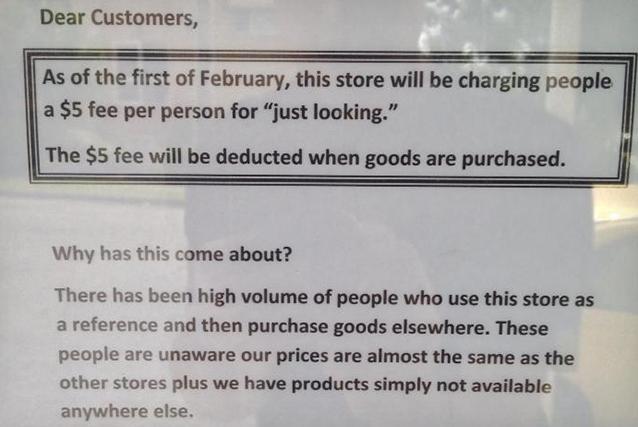 You would be interested in knowing as well as try not to be a part of such thing (may be although totally depends on you), a speciality food store in Brisbane, Australia is charging its visitors an AUD$ 5 in a bid to stop showromming. The store dubbed as Celiac Supplies, mentioned it as “Brisbane’s only store for glutenfree and wheatfree store,” make a huge count yesterday when someone posted an image on Reddit (via The Verge) which says, “As the first of February, this store will be charging people a $5 fee per person for “just looking” (isn’t interesting).

On tracking the store owner, the Associated Press found the owner and while discussing the matter of fact, she said, “I’m not here to dispense a charity service for [large supermarkets] to make more money” and the “customers will be refunded the $5 money back as soon as they make a purchase.” What more, no doubt, with certainly something like this comes in front of us, but if we notice, somehow, this is even correct also as the owner says itself that there is no charity service going on. So, for the next time you visit the store and do just “Showrooming” make sure you will be ready to pay AUD$5.