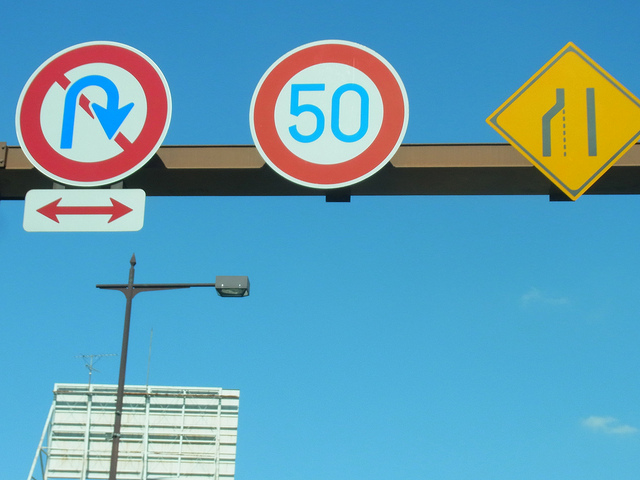 No-one goes out of their way to break the law here in the UK, but there is a widely-held belief that many road traffic laws are there to generate revenue for Her Majesty’s Government rather than to protect us drivers. Thus, we break the law; if not intentionally, then thanks to a lack of appropriate care and diligence. We’re all guilty of a motoring misdemeanour every now and again, but could you be incurring hefty fines with reckless road going behaviour such as the below?

‘Was I going a little too fast, officer?’

If you’re a motorist who does a lot of driving, it’s highly likely that you’ve broken the law already today. Speeding is perhaps the most oft-flaunted law in Britain, with thousands of motorists creeping past the 30mph residential mark or the 70mph motorway maximum. Learning to lighten that lead foot, however, can save you a fortune. There’s a fixed penalty of £60 for anyone caught speeding and fines can get far more onerous than this, as well as the risk of gaining points on your licence!

How many times a week are you let down by your SatNav and forced to make an abrupt about-face? Looking for a suitable place to turn will just take you further and further out of your way and add even more minutes to your journey time, so a cheeky U-turn may very well be on the cards. Don’t start too soon, though – U-turns are illegal on many UK roads, and performing one could land you with a heavy fine. We’ll take the delay next time, thanks!

‘They never get traffic wardens along here, mate’

If you live or commute in the city then you’ll know the pain of trying to find somewhere to park in a densely populated area. Streets and streets will pass without a single vacant space before you finally find one, and it’s residents only. Further searching reveals a suitable spot, but it’s metered and costs £5 per hour. ‘£5 per hour? I’d rather risk the fine.’ Except, inevitably, you’ll be caught parking illegally and have to shell out a fine of as much as £60 for the privilege. If you run a fleet of delivery drivers or people who must frequently visit clients, do your best to help them by researching parking in advance.

Slipped out of the pool and behind the wheel

There’s a common misconception amongst drivers here in the UK that driving barefoot is illegal. As a matter of fact, it isn’t, so this summer you can slip your shoes off behind the wheel with impunity! Be aware though that there are laws regarding footwear that you do need to follow when driving on Britain’s roads. Your choice of footwear is not allowed to impede your control over the vehicle or endanger the safety of other road users, so if you’ve just been swimming and slip behind the wheel with wet feet, for example, you’re actually breaking the law! You’ll probably find that flip-flops also put you at risk.

Sod it; I’ll renew it on payday

There comes a time in every motorist’s year when the car insurance must inevitably be renewed. If you’re the disorganised sort (aren’t we all?), this date can easily sneak up on you and leave you in the lurch. It’s all too easy to think: ‘I can’t afford to renew the insurance right now – let’s wait until payday.’ Of course, driving without insurance on Britain’s roads is highly illegal, and besides the fine you’ll be presented with should you be found out, the damages incurred during an accident will be yours to pay alone…

Lawbreaking fleet and domestic motorists could be in for a nasty shock should they be caught misbehaving, so it pays to be good behind the wheel in more ways than one! Fortunately, fuel card scan help to improve your fleet fuel efficiency and reduce dead mileage, so if you’re looking to save on motoring expenses this year you need look no further!