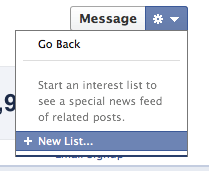 With the entire announcement led Facebook’s release of new feature: Timeline for brand pages, along with this, it is seems to be that the company accidentally release another feature that was still to make its debut, Socialfresh suggests. According to the site, some users of the world’s largest social networking site have noticed a new option on brand’s Timeline pages suggesting that you can add the brand’s page to a list, with the following text:

Start an interest list to see a special news feed of related posts.