You, me and almost every person who love to call himself a social-ize know pretty well that Facebook having a billion users, but what make this more interesting is that for the fourth time in a row, the social giant crowned the number one search term. According to new data from Experian, Facebook accounted for 4.13 percent of all searches in 2012, a 33 percent increase over 2011. 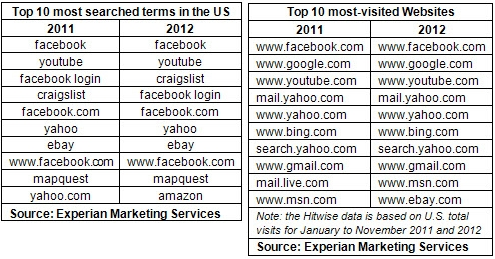 Along with this, Experian counted on that in all the total top 50 search terms accounted for over 12 percent of all internet searches in 2012, representing a 30 percent increase compared to 2011. While the new terms which entered the top 50 search terms for 2012 included: backpage, cool math games, fox news, pinterest and pof.