Ericsson has just announced its first quarter 2012 results. The company earnings before interest and tax reached 2.8 billion crowns ($416 million) excluding loss-making joint ventures but including restructuring charges. The company sees net income SEK 8.8 b. up 116% YoY, impacted by gain from Sony Ericsson divestment of SEK 7.7 b and loss in ST-Ericsson. Operating margin of 5.5% excluding gain from Sony Ericsson divestment and loss in ST-Ericsson. 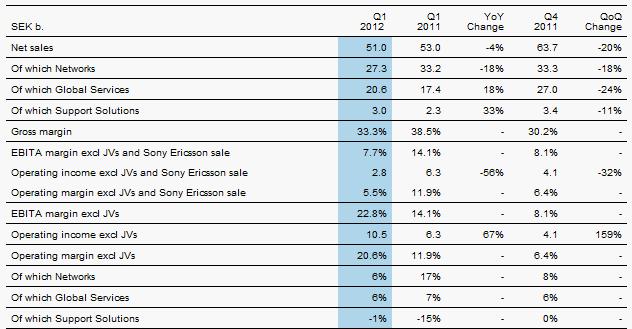 “Gross margins … surprised positively well ahead of consensus, so the nice beat on the gross margin is the key take away here I think as people were fearing that the low trend set in Q4 last year would continue,” said Alexandre Peterc, analyst at brokerage Exane BNP Paribas. Peterc at Exane BNP Paribas said sales were light, though this had been partly expected due to a decline in older, CDMA-standard equipment in the United States. The company beat expectations for earnings and margins in the first quarter.