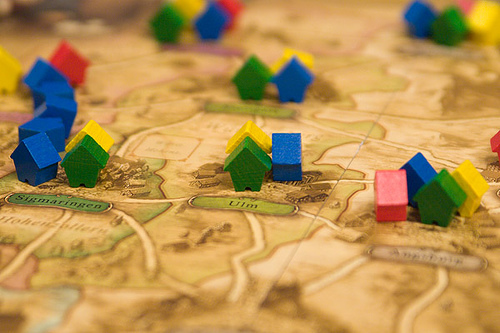 When travelling, one of the few guarantees you have is that you’ll end up waiting at some point.  Whether it’s in an airport transit lounge or the bus stop, methods to pass the time are invaluable.  Music, books and smartphones are all invaluable.  However, when power is at a premium and you’d like to be a little more social, you should consider a few designer board games.

Designer board games or niche board games is a hot and growing trend.  First imported from Europe, these days well-designed and fun board games come from all over the world.  These aren’t the games of your childhood but serious, thought-provoking and sheer fun.  They also make great travel gear due to their low weight and dimensions and high replayability with numerous types of games available to suit any play style.

If you are travelling alone, finding ways to entertain yourself can be difficult.  Friday is a solo-play card game that has won numerous awards due to its innovative gameplay mechanics and increasing levels of difficulty.  Each game lasts about half an hour to complete which makes it a great time-killer for short waits.

Another solo-play game that can be expanded to include other plays is Space Hulk: Death Angel.  In Space Hulk, players are Space Marines researching a derelict spaceship and must fight their way through swarms of Genestealers.  Reminiscent of Alien 2, players have a tense battle ahead of them in this atmospheric science fiction game.

If you are travelling with a friend or significant other, you might want to be a touch more social than a solo play game.  In that case, we recommend either Blokus Duo or Battle Line.  Blokus Duo is an abstract, tile-laying game that is highly competitive and is reminiscent of playing competitive Tetris.  With a small, fixed board and a set number of pieces; Blokus Do will attract those who enjoy games like Chess or Tetris where all the information you need is present on the board.

On the other hand; Battle Line is an aggressive, tactical wargame.  Players are competing generals who must attempt to win ‘flags’, breaking through the ranks of the competing armies.   To do so, players must manage the hand of cards (their soldiers) and the tactics they use in the battle.

If you have a few more in your group or just want to have the option to add players, a co-operative game is extremely flexible.  Forbidden Island would be our first suggestion.  A hit board game, it is easy to teach new players, has a modular game board and is fast to play.  Players each control characters who have special powers in a quest to recover four sacred treasures from the fast sinking island.  You’ll have to work together to stem the floods while collecting the treasures and finally, making it off the island all together.

Another great co-operative game is Elder Sign.  Based off the works of H.P. Lovecraft, players are investigators working together to stop the rise of an Ancient One.  They have to gain enough clues to gain the seals to permanently seal the breach the Old One is attempting to exploit but must battle numerous monsters and cultists to do so.  A highly popular board game, it requires a bit more space to play but with multiple Ancient One’s available in the base set, is also extremely replayable.

Almost all of these games can be bought at your local game store or an online game store like Starlit Citadel. Some of these games are also available at Target & Wal-Mart or your local Barnes & Nobles for purchase.  Prices for many of these games range from $10 – $20 a game, making them all extremely affordable for even the most budget conscious traveler.

Tao Wong is an experienced e-commerce entrepreneur with a background in online marketing. As the owner of PDB Sales Inc. he owns and manages the Canadian-based e-commerce websites Starlit Citadel and Fortress Geek.