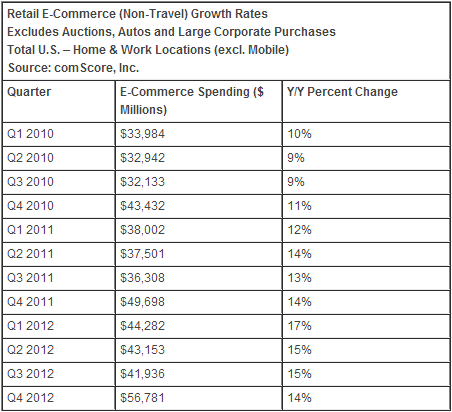 According to the latest numbers from comScore, for the full year, US retail e-commerce sales reached $186.2 billion, an increase of 15 percent while the fourth quarter 2012 sales grew 14 percent year-over-year to $56.8 billion, making it as first ever $50 billion quarter. The top-performing online product categories for the fourth quarter 2012 were: Digital Content & Subscriptions, Consumer Electronics, Toys & Hobbies, Apparel & Accessories, and Books & Magazines.

“2012 was a year in which – for the most part – e-commerce continued to grow strongly, despite an uneven macroeconomic environment showing signs of recovery but also cause for continued concern,” said comScore chairman Gian Fulgoni. “With e-commerce growth rates consistently in the mid-teens throughout the year, it is clear that the online channel has won over the American consumer and will increasingly be relied upon to deliver on the dimensions of lower price, convenience and selection.”