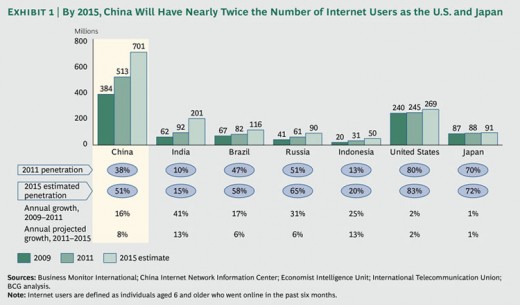 China already hit the par as knowing as world’s biggest smartphone market but on the Internet it is still working on to make its place. A new report by Boston Consulting Group revealed that by 2015, China will add nearly 200 million users, reaching to an internet population of more than 700 million users, almost double the combined number of what Japan and U.S. holds. Furthermore, it is also likely that the country will occupy its place and will like become the largest online retailer market in the world, with close to 10 percent of retail sales occurring online. The big three Internet companies—Alibaba, Baidu, and Tencent—have a firm hold on their corners of the market (e-commerce, search, and messaging, respectively) and are working hard to consolidate their positions and move into new fields.