In the last 50 years mankind has laid the track for limitless discoveries in science and technology –from mapping the entire human genome to engineering machines that can land on a shooting comet. We’ve done pretty good for ourselves, it seems.

However with all of the borrowed technologies volleyed up to us from our predecessors, some aren’t that impressed by in-flight WIFI, or the world’s next tallest skyscraper.

This post is for those people; the ones unimpressed by self-driving cars, or cloned meat. This post is all about the best windows with which to view mankind’s’ best historical achievements, dated, but not forgotten. 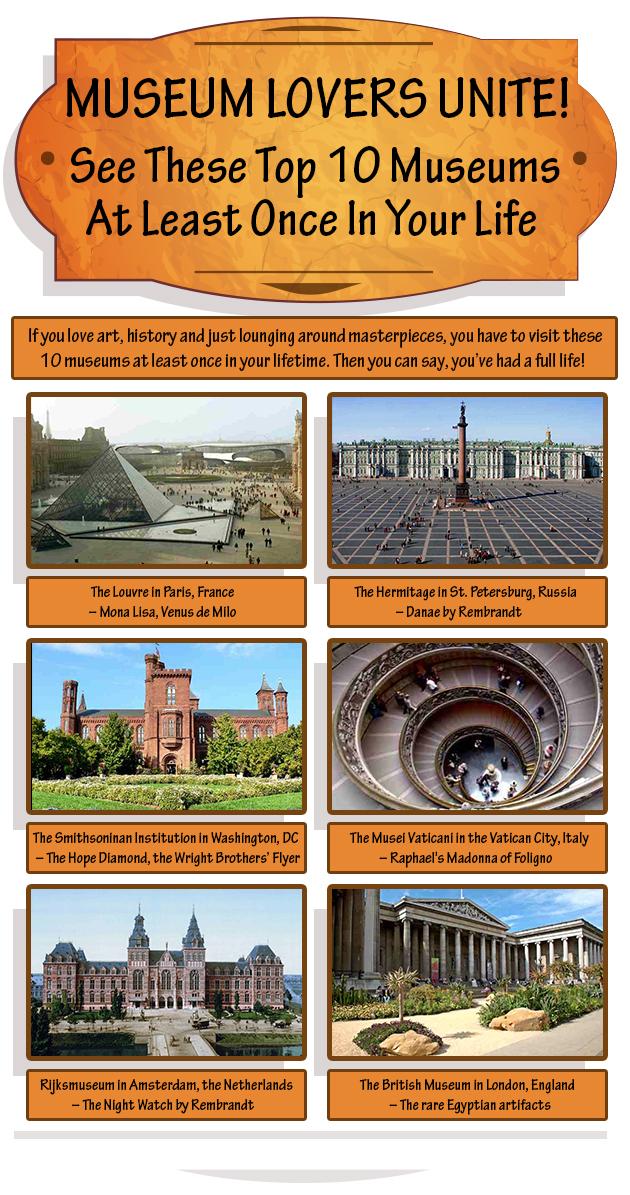 Here is our list of the very best museums from around the world, and what you can expect to find in them.

Originally a medieval fortress, the Louvre as we know it today is marked by I. M. Pei’s contemporary and controversial glass pyramid which was built into the museum back in 1989 and kept exhibition contractors on their toes.

Within the walls of the fortress which also served as palace to early French kings, a treasure of early 19th century antiquities, priceless art, and even Egyptian ruins are waiting for you to see.

Of The Louvre’s noteworthy spoils which include Leonardo Da Vinci’s Mona Lisa, and Venus de Milo, the Winged Victory of Samothrace is our favourite.

Home to over 3 million pieces, Russia’s State Hermitage can hold its own when compared with other world class museums.

Its facilities, too, are world class. With six buildings lining the Neva River and their focal point being the baroque Winter Palace which was erected in 1764, the Hermitage was converted into a museum when Catherine the Great purchased 255 paintings from Berlin.

Items listed in the Hermitage’s inventory range from the time of prehistoric man, all the way to the 20th century, and place focus on Western European art. Of all of the art in its over 120 rooms, one can find the work of Rembrandt, Rubens, Tiepolo, Titian, Picasso, van Gogh, da Vinci, and Goya among many, many others.

Before one even reaches the base of the Acropolis, they are spoiled with the ability to walk over a real archaeological excavation site which is encased in glass, revealing the spoils from the slopes of Acropolis.

Athenian life can be observed through additional archaeological excavations which have revealed sanctuaries which date back to different times in prehistory, the closer one gets to the Acropolis’ central structure.

Of all of the notable pieces which rest within its walls, our favourite is the frieze of Parthenon.

The Smithsonian is incredibly vast, as it is the world’s largest research and museum complex, housing a total of over 137 million pieces which meticulously detail the history of America and its place in the world.

The Smithsonian is home to the National Zoological Park, over 19 galleries and museums, and several research stations throughout.

That collection of over 137 million pieces we mentioned would take over 100 years for you to find the time to amply explore everything on its inventory list!

A small handful of the notable wonders within the walls of The Smithsonian include the Apollo 11 control module, the Wright Brothers’ 1903 Flyer, the Hope Diamond, the original Star Spangled Banner, and even Dorothy’s ruby red slippers.

Dating back centuries, the kings and queens of this establishment which was designed by Juan de Villanueva have procured priceless works of art from artists of Spanish, Italian, and Flemish descent.

Opened to the public in 1819, some of the pieces housed within originate from the talented hands of Titian, Raphael, Velázquez, Goya, Ribera, and Zurbarán.

Composed of 22 individual collections, the museums of the Vatican are famous for works like MuseoPio-Clementino, the Raphael Rooms, the Pinacoteca, and Michelangelo’s Sistine Chapel.

In addition to home-grown artworks, the MuseiVaticani are also home to several ancient artifacts from Egypt.

The fact that this instalment on our list doesn’t house millions upon millions of pieces only makes it easier to see everything. Every single item in the Vatican museums are noteworthy –miss nothing!

The Rijksmuseum possesses the largest art collection in the history of the Netherlands, with a grand total somewhere in the neighbourhood of 900,000 pieces.

This museum was made famous by art from the Middle Ages, in addition to its collection of 17th century paintings by Dutch greats, including; Rembrandt van Rijn, Frans Hals, Johannes Vermeer, and Ruysdael.

The largest museum in the Western Hemisphere, New York City’s Metropolitan Museum of Art (also known as “The Met”), is incredibly humongous, and boasts a collection of over 2 million pieces.This museum possesses a vast collection which articulately covers the world, spanning as early as circa 23 to 10 BC’s Temple of Dendur to Egyptian’ Tomb of Perneb, circa 2440 BC.

With an inventory of over 8 million pieces, Britain’s largest museum has accumulated objects from prehistoric bones, to pieces of the Parthenon from Athens.

Perhaps the most notable of exhibits to be found at the British Museum is its collection of rare Egyptian artifacts. This collection is the second finest in all over the world!

The Uffizi Gallery holds the most desirable collection of Renaissance paintings in the entire world, with artists ranging from Titian, Raphael, Bronzino, Botticelli, Da Vinci, and many others.