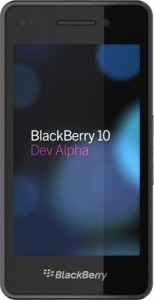 Today at RIM’s BlackBerry World 2012 Conference, the company has unveiled a picture that is RIM’s official dev unit for its just launched BlackBerry 10 platform. The alpha units will feature a jaw-dropping 4.2-inch, 1280 x 768 displays that best the 720p panels found on other similarly-sized handsets. The device sports 16GB internal storage and 1GB of RAM. It’s not a prototype, it’s not a phone that will ever be released, and RIM wants to make very clear that it’s not necessarily indicative of what future BB10 phones will be. But what it exactly is a device that developers can use to create BB10 apps. With the ongoing keynote, it is expected that RIM will never give up on physical keyboards entirely, but it is clear that company was focused on making an all-touch device work as a BlackBerry device. Stay tuned with us and we will update more to you.