If you are a huge fan of Apple, then one or many times in life you do have thought of meeting the company’s CEO Tim Cook or at least try finding out the ways. Well, today we are here giving you a way as according to a Charitybuzz, Cook is holding a charity auction, in which you not only meet him but also you do have a cup of coffee and even chat with him at the Apple’s HQ. 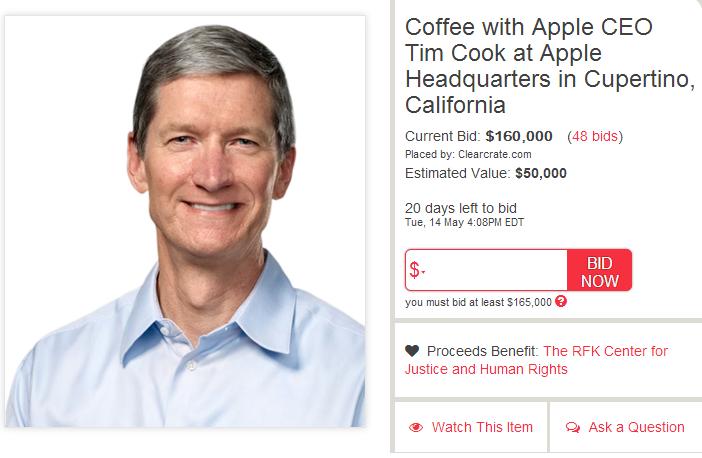 The bidding which currently stands at $160,000 with 48 bids already taken place, while over the top the current bid is more than three times the actual estimated value which being marked as $50,000. Interesting, this is the first time when Cook has ever being auctioning off for one-on-one rights for charity.

Here is how CharityBuzz defines the Tim Cook lot:

Bid now on this unique opportunity to have coffee with Apple CEO Tim Cook at Apple headquarters.

Tim Cook is Apple’s CEO and serves on its board of directors. In 2012 he was named a runner-up to TIME’s Person of the Year and topped Vanity Fair’s New Establishment list. Before being named CEO in August 2011, Tim was Apple’s Chief Operating Officer and was responsible for all of the company’s worldwide sales and operations. He also headed Apple’s Macintosh division. Tim earned an MBA from Duke University, where he was a Fuqua Scholar, and a Bachelor of Science degree in Industrial Engineering from Auburn University.