You might know Amazon as an online shopping store or the maker of the Kindle but many of us still do not know the third category it involves into – the Amazon Web Services (AWS). AWS sells access to servers to help hosts many of websites across the world. Now what interesting here is – Wired reports that a new finding from DeepField Networks revealed that Amazon’s servers handle one percent of all consumer internet traffic on the web. 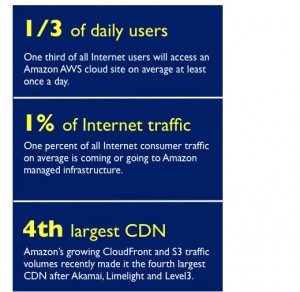 The study is based on “multiple weeks’ worth of network data” from “several million Internet end-users (mainly in North America).” Those massive numbers come in from sources like Netflix, which utilizes AWS to power its streaming services which made DeepField’s top 40 lists of AWS users, sorted by traffic.