The much beloved automotive company Audi is seen in the process of chasing the visions of all with its news Visions OLED lighting concept for ultra-impressive arrays of interactive lights that is coming across both of its R8 and Q7 model vehicles. Stephan Berlitz, Head of Lighting Electronics for the car maker, states that we’re still some way out from OLED surfaces replacing front and brake lights, due to low currents and the temperature ranges the diodes can presently operate under. 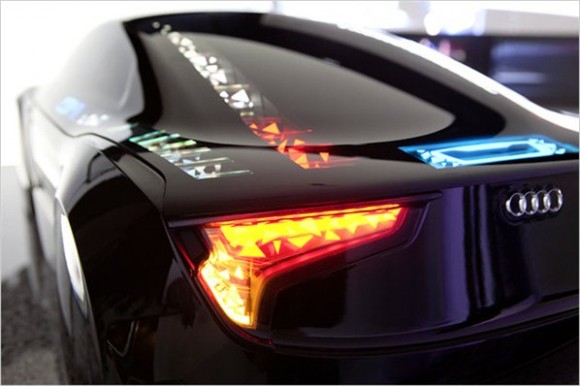 OLED lights or what it is knows as Organic Light Emitting Diodes are at work here – four small red OLED plates are aligned next to one another in the Audi Q7, with then eight flat segments making up the curved yellow strip to display the “turn” indicator. If you watch the video after the break, you may have a few ideas that what the Audi’s “Visions” hold for future.