Being considering China as one of the most important nation by Apple, the Cupertino-based company digitally divide the country with 21 million iPhones and iPads, although urban areas dominating. According to figures from Stenvall Skoeld and Company, ownership is dominated by just a few select urban areas. 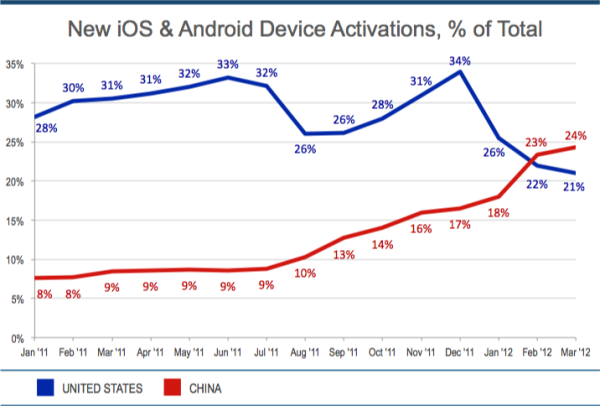 Based on recent research from Flurry — which indicated that China has overtaken the US as the largest market for new smartphone activations — Stenvall Skoeld estimates that, as of the end of 2011, there are a total of 21 million iPhones and iPads in China. The figures have been generated using using a combination of data from sources including Chinese mobile research firm Umeng and Stenvall Skoeld’s own analysis of iOS devices in the country. 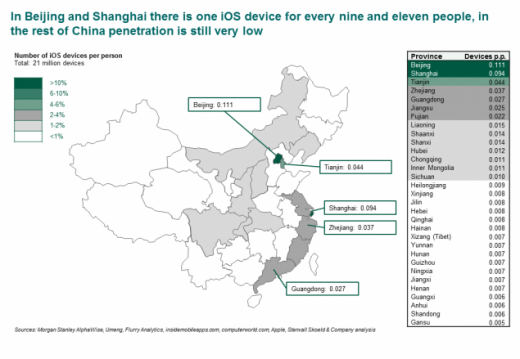 The firm breaks the numbers out by region and, as per the graphic; it is no surprise that urban areas like Guangdon, Beijing, Shanghai, Zhejiang and Jiangsu account for the lion’s share of devices. On average, an iOS device is owned by close to one in ten people in Beijing and Shanghai, that ratio is considerably higher than most other parts of the country and something that Stenvall Skoeld & Company’s Carl-Johan Skoeld is surprised by: Apple’s success is China has been hard to miss (sales in Q4 2011 reached $ 4.5 billion), but the high penetration rates in Beijing and Shanghai still surprised us.