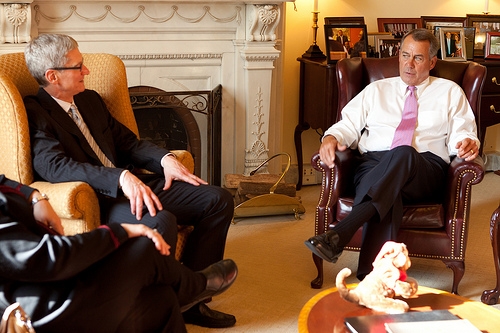 A surprising photo surfaced over the web that goes with no text, only the caption said, “Speaker John Boehner met with Tim Cook, CEO of Apple Inc., at the U.S. Capitol today.” Fortune reports that Apple is adopting a new, more engaged approach to Washington and the policymaking process.

Besides meeting with Speaker of the House John Boehner, Cook also met with Senate Majority Leader Harry Reid and Senate Minority Leader Mitch McConnell. “It was an act of opening up a line of communication,” one aide told Fortune, “but it was a first step in what hopefully will be a growing relationship. They didn’t become best buds in one meeting.”