The overheated Apple versus Samsung trial has revealed a lot more (said to be real) US sales numbers of both the companies. The document which was prepared for the trial by the Invotex Group, list not one, not two but the US sales numbers for the iPhone, iPad and iPod touch and along with this, a total of 24 different Samsung smartphones and three Galaxy Tabs.

The document showed that the company sold over 85 million iPhone in the States with revenue coming in at over $50 billion, while the Cupertino-based giant had moved over 34 million iPads in the same period, bringing a revenue of over $19 billion. 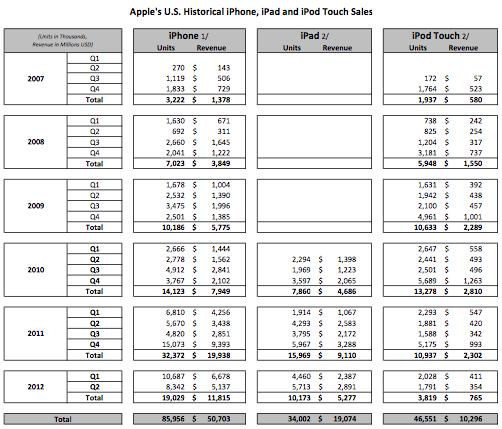 For Samsung, the document revealed that Galaxy S II Epic 4G Touch made $764 million as revenue for the company selling 1.675 million units. The chart also showed that Samsung sold 585,000 units of the original Galaxy Tab 10.1, while the LTE variant came in at just 125,000.