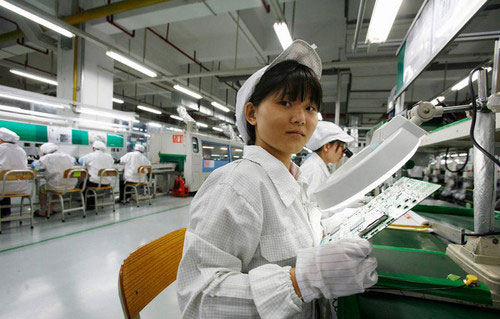 Apple in its recent moves over the Chinese factories working condition and which is named to be as an “unprecedented move,” opened up its factories and supply chain in China to a full review to ABC news – allowing them to create a report – ABC broadcasted a special “Nightline” episode filmed at Foxconn’s facilities in Shenzhen and Chengdu, China on Tuesday night, there may not have been any such shocking new revelations but Apple, FLA and Foxconn have issued some small corrections and statements.

“In manufacturing parlance this is called deburring. Her line processes 3,000 units per shift, with two shifts per day for a total of 6,000. A single operator at Ms. Zhou’s station would deburr 3,000 iPads in a shift.”

Foxconn Statement over starting pay being too low for a Chinese payroll tax withdrawal:

“If the overtime hours are in weekdays, they have to work around 63 hours per month to reach that level of salary to be taxable.”

“Your statement is only true when applying to the entry-level workers while over 75 percent are already over the probation and earning more than 2,200 RMB basic salary.”

Auret van Heerden, President and CEO of the Fair Labor Association, regarding the “five year conversation” with Apple:

“The discussions began in April 2007 but stalled in March 2008. We then resumed them in April 2009 and decided to do a small pilot survey so that Apple could get an idea of how our tools might add value to their program. That pilot led to a second activity that I believe contributed to the decision to join the FLA at the end of 2011. I, of course, cannot speak for Apple but I do believe that the decision to join was probably taken some months before (and therefore well before) the New York Times articles.”

The comments confirmed that worker in the Apple’s supply chain might have been working two 12 hours shifts – other is that Apple has been working with the FLA in such a limited capacity for some time only – and the Foxconn’s statement came in regard that whether workers earn even enough that much to even need to pay taxes.

You can see the full episode of Nightline here.