Hacker group Anonymous did what they said to “again”, the group has released what according to them is the source code for Symantec’s Norton Antivirus 2006. AntiSec, an Anonymous affiliate, has released a 1.07GB file on The Pirate Bay titled “Symantec Norton AntiVirus 2006 All Platform Source Code.” The code was allegedly stolen along with other Symantec products.

Earlier, a hacker group name YamaTough destroy the code, hacker released the source code for antivirus firm Symantec’s pcAnywhere utility; raising fears that other could probably find out the security pitch in the product and attempt takeovers of customer computers.

Symantec told The Inquirer that it is currently analyzing the code to determine its authentication level and it expects that the code for Norton Internet Security 2006 to be released at some point as well. On a whole, the company mentioned that users need not to worry as the stolen code was “old code”. 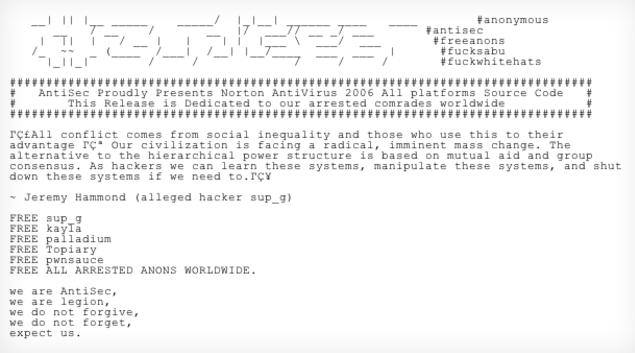