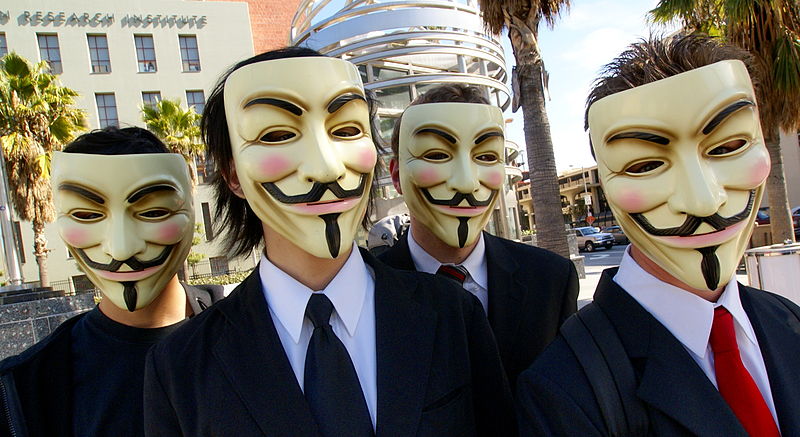 The hacker group Anonymous over the weekend had attacked some 650 Israeli websites (which Twitter later confirmed that the total number is 9000 sites) over when the Israel Defense Force (IDF) started taking military action in the Gaza strip against Hamas. Anonymous name the operation as #Oplsrael with sites and emails of thousands and more individuals, hundreds of Israeli websites, government-owned pages, private pages, database belonging to Bank Jerusalem and the Ministry of Foreign Affairs.

For far too long, Anonymous has stood by with the rest of the world and watched in despair the barbaric, brutal and despicable treatment of the Palestinian people in the so called “Occupied Territories” by the Israel Defense Force. Like so many around the globe, we have felt helpless in the face of such implacable evil. And today’s insane attack and threatened invasion of Gaza was more of the same.

But when the government of Israel publicly threatened to sever all Internet and other telecommunications into and out of Gaza they crossed a line in the sand. As the former dictator of Egypt Mubarack learned the hard way – we are ANONYMOUS and NO ONE shuts down the Internet on our watch. To the IDF and government of Israel we issue you this warning only once. Do NOT shut down the Internet into the “Occupied Territories”, and cease and desist from your terror upon the innocent people of Palestine or you will know the full and unbridled wrath of Anonymous. And like all the other evil governments that have faced our rage, you will NOT survive it unscathed.

To the people of Gaza and the “Occupied Territories”, know that Anonymous stands with you in this fight. We will do everything in our power to hinder the evil forces of the IDF arrayed against you. We will use all our resources to make certain you stay connected to the Internet and remain able to transmit your experiences to the world. As a start, we have put together the Anonymous Gaza Care Package – http://bit.ly/XH87C5 – which contains instructions in Arabic and English that can aid you in the event the Israel government makes good on it’s threat to attempt to sever your Internet connection. It also contains useful information on evading IDF surveillance, and some basic first aid and other useful information. We will continue to expand and improve this document in the coming days, and we will transmit it to you by every means at our disposal. We encourage you to download this package, and to share it with your fellow Palestinians to the best of your ability.

We will be with you. No matter how dark it may seem, no matter how alone and abandoned you may feel – know that tens of thousands of us in Anonymous are with you and working tirelessly around the clock to bring you every aid and assistance that we can.

We Do Not Forgive

We Do Not Forget

To the oppressors of the innocent Palestinian people, it is too late to EXPECT US

With the move, the Anonymous today even started leaking out what it called to be as data of over 3,000 names, home address and phone numbers.