The hacker group Anonymous had targeted sites affiliated with the Formula One races. The attack which was launched as a part of Anonymous “Operation Bahrain,” with the hacker collective promising Bernie Eccelstone, Formula One CEO that they would  take down the official website, turning it into “a smoking crater in cyberspace.” The group has promised to attack Formula One online for the duration of the races. According to ZDnet, other fan websites taken down included f1officialpartners.com, live-timing.formula1.com, and totalf1.com. The attack was also accompanied by a data dump from the website, containing information relating to Formula One ticket sales. The data includes names, email addresses, and passport numbers, with personal information redacted. 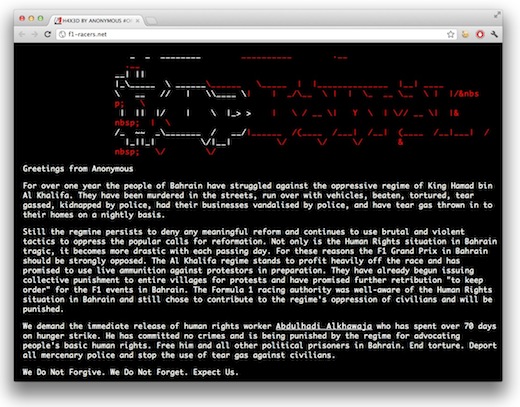 For over one year the people of Bahrain have struggled against the oppressive regime of King Hamad bin Al Khalifa. They have been murdered in the streets, run over with vehicles, beaten, tortured, tear gassed, kidnapped by police, had their businesses vandalised by police, and have tear gas thrown in to their homes on a nightly basis.

Still the regmine persists to deny any meaningful reform and continues to use brutal and violent tactics to oppress the popular calls for reformation. Not only is the Human Rights situation in Bahrain tragic, it becomes more drastic with each passing day. For these reasons the F1 Grand Prix in Bahrain should be strongly opposed. The Al Khalifa regime stands to profit heavily off the race and has promised to use live ammunition against protestors in preparation. They have already begun issuing collective punishment to entire villages for protests and have promised further retribution “to keep order” for the F1 events in Bahrain. The Formula 1 racing authority was well-aware of the Human Rights situation in Bahrain and still chose to contribute to the regime’s oppression of civilians and will be punished.

We demand the immediate release of human rights worker Abdulhadi Alkhawaja who has spent over 70 days on hunger strike. He has committed no crimes and is being punished by the regime for advocating people’s basic human rights. Free him and all other political prisoners in Bahrain. End torture. Deport all mercenary police and stop the use of tear gas against civilians.