According to a report from CNET, Amazon is planning for giant greenhouse offices for its new Seattle campus. The new offices would be a bug artificial biome at its Seattle campus. The e-commerce giant shared new drawings (PDF) revealing series of colossal, mirrored, biosphere-type domes along with a taller rectangular building which could be its new campus.

The designs credit goes to architecture firm NBBJ while the project proposal states that design was made in context to “create an alternative environment” where “employees can work and socialize in a more natural, parklike setting.” 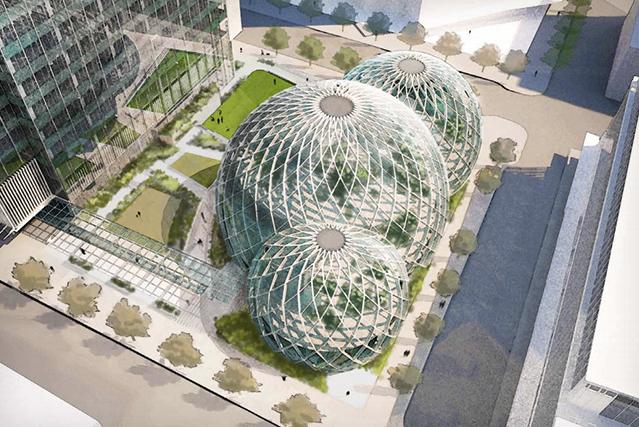 “The generative idea is that a plant-rich environment has many positive qualities that are not often found in a typical office setting,” the proposal says. “While the form of the building will be visually reminiscent of a greenhouse or conservatory, plant material will be selected for its ability to co-exist in a microclimate that also suits people.”

As per the proposal, the new proposed offices will have in-house dining, meeting, and lounge spaces along with “a variety of botanical zones modeled on…ecologies found around the globe.” The campus include 3.3 million square feet of office space, with total three 37-story office towers with three massive sphere will range from 80 to 95 feet high each.