Akamai today in its State of the Internet report for first quarter 2013 reported that an average internet speed will get up 17% on year-over-year basis and has finally passed 3 Mbps, while mobile traffic got doubled. The increase means that the global average connection speed increase 4 percent from 2.9 Mbps to 3.1 Mbps, or 17% year-over-year. 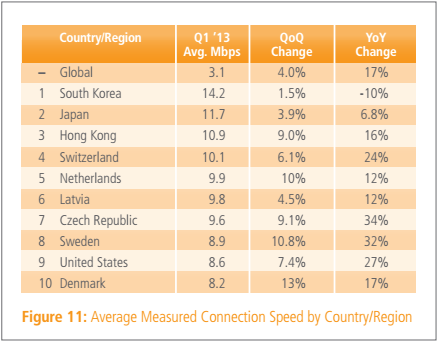 The report further added that at par 123 countries experienced an increase in average connection speeds year-over-year this quarter, ranging from Czech Republic with 34% year-over-year increase to Sweden with 32% year-over-year. Akamai also reported that the global broadband adoption has increased 5.8% last quarter to 46%.

“This quarter’s State of the Internet Report shows continued positive growth in terms of Internet and broadband adoption worldwide,” David Belson, the report’s editor, said in a statement. “We have seen overall increases in average and peak connection speeds along with greater broadband penetration on both a quarterly and annual basis.”