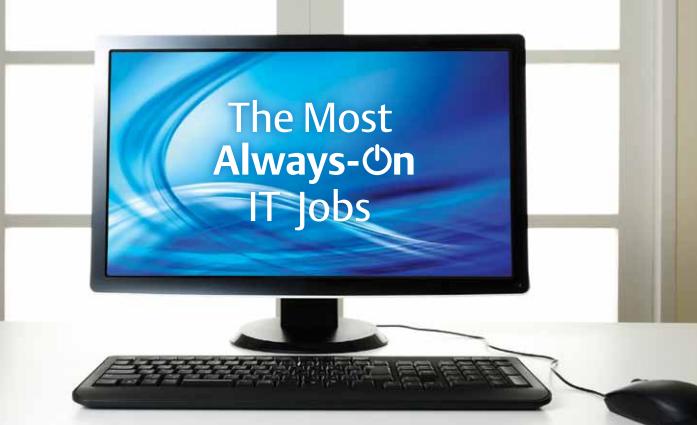 It’s quite often that you not able to come up with the job that you really want to do. Some people worked late in nights, and for some their office timing starts in the middle of night, some have to attend the clients (online) in the variation of time, and sometimes if system get corrupted, the whole working come to a pause. In short we are living in the world where life (work actually) runs 24 X 7 X 365.

The idea of this article comes from an interesting report, which was released by Emerson Network Power, “The Most Always-On IT Jobs,” based on a survey of 792 IT professionals from different parts of world: Asia, Europe, Latin America and the United States. Now, the X factor here is that the criteria set is that these are those jobs in which the IT professional need to be available almost whole day and have to work with more accurately, leaving no stone unturned.

Some known points, before putting up those 10 jobs:

Executive Director/Administrative: IT professionals in an executive director/administrator role included administrator, leader, department head and director. All survey respondents performing this highlevel role agree they work on many projects at once, and that their work requires a high level of intelligence. Only 25% agree or strongly agree that success depends on things out of their control. In other words, they are accountable for success, and that translates into high job demands

IT Procurement: They identified themselves as analysts, buyers, representatives, supervisors, consultants, directors and leaders. More than half of respondents who say they do IT procurement are aligned in reporting they don’t have control over their schedules and don’t have time to do quality work. These Always-On professionals point to multiple pressures: urgency, demanding clients (often in different international time zones), staying up on the latest equipment, filling pressing staffing needs.

Chief Information Officer (CIO): The CIO scores highest on “dependencies and multi-tasking.” Responses show particularly high requirements to work on many projects at once and make important decisions quickly. And those decisions can be required any time. Demands of the job also include motivating and orchestrating the work of others, making sure all team members are performing to their abilities and “getting everyone on the same page” for projects.

IT Manager/Director: Professionals in this role need to be on fires or do routine work at any time, including nights and weekends. Respondents say demands on the IT manager/director include juggling several projects at once, solving problems quickly and working at peak capacity at all times. The IT manager/director job scores second highest on being a public leader. Respondents say they have responsibility for a large portion of the company’s budget and for leading the meetings he or she is in.

IT Operations: Respondents employed in IT operations give many titles, including technician, manager, analyst, operator and specialist. They report working on high-stress projects with constant time pressure and responding to after-hours incidents.

Engineering: Dependencies, multi-tasking and quick response, all define Engineering professionals.   More than 80% agree or strongly agree that others depend on their work a great deal, 91% say they immediately read all messages received and 86% quickly respond to all inquiries. Notably, 30% of the respondents work for consulting engineering companies.

IT Security:  Making emergency decisions is noted as a typical demand of the job. Likewise, 89% of the security pros agree or strongly agree they make important decisions quickly – the highest score of all the IT roles. On the other hand, this group scores lowest on quick response.

Application/Software Development: One-third or less report having no time for quality work (33%) and no time to think things through (26%). The position is far from pressure-free, though. Demands of the job include developing new applications for the workplace or industry, some involving highly complex issues.

Database Management: 87% of database managers say others depend on their work a great deal. Where the two areas diverge is on certain indicators of working capacity/bandwidth. Over half (58%) of database managers agree they have no time for quality work, and 47% agree they have no time to think things through. Those responses are consistent with the demands of the job.